So here I am on a balmy morning in Tenerife, playing “snowman”. Well it is almost christmas so I guess the name is appropriate. But this exercise has nothing to do with snow but rather it is a beach volleyball training drill and it’s taking place on the warm, fine, dark sand of Los Cristianos - the location head coach Denise Austin has chosen for her winter training camps with Beach Volleyball Inc.

It does take me a while to figure out the gist of the drill but once the snowmen are drawn in the sand it becomes a bit more apparent. These are the areas occupied and therefore easily defended by your opponents so any ball sent over here is going to be received with gratitude and will probably be coming back your way with interest very shortly. So avoid the snowmen at all costs! Minus 3 points for that error. Bonus points are available for hitting the areas of the court near the lines and corners. We kick off. But we are soon into negative double figures. We’re simply playing it too safe. Denise has designed the drill to encourage bravery when sending the ball over and to make your opponents work for the point. Once we start getting a bit more confident and producing some good plays, she ups the ante, enhancing the drill by having us run round some cones before coming on as pairs to make our play. She saw that some players weren’t being challenged enough and had started to become casual with their technique. It’s hard work and I’m soon out of breath but getting totally focused, loving every minute.

Denise is no stranger to coaching and motivating players in beach volleyball on or off the sand. She has been a legend on the beach scene since the 1990s travelling all over the world to compete at the top level. Later she moved into into training others yet still plays competitively.
She understands what will make her students perform. She is also a master of managing a diverse group scenario. We are a mixed ability group with an age range from 13 to 50, yet she challenges everyone on the sand. To help her with this, she has 2 excellent support coaches: Mo Glover (Olympian, firefighter and close peer of Denise’s in the sport) and Sam Dunbavin (a super motivated, clever, young talent who has been under Denise’s tutorage for several years). With this extra personnel, it’s easy to take players aside for some extra work or to split the group.
Also along for the 6 week run of courses in Tenerife are Denise’s husband, Nick (master of designing and setting up the courts and always good for some technique tips), her daughter Ellie (who at 13 is proving formidable already and can hold her own on the adults UK beach tour) and her 3 year old daughter Layla who no doubt will be taking up the sport soon! Testament to the community and bond Denise has developed with her tribe, also along as a school tutor for Ellie is Jack, a very competent athlete and long time student of Denise.

So by the end of the snowman exercise Denise has expertly crafted the drill to a level where as players we are “in flow”. I.e. all the technical stuff that we worked at the day before is coming together at a subconscious level (well at least some of it!) and the mind and body are totally focused with no distractions. This almost meditative level of performing is the moment I love in all sports I do. Here it has been engineered by adding enough to the drill to challenge everyone and make us work that bit harder but whilst still making it achievable and adding an element of competition as a motivation.

A few words on the schedule of the camp.
We train from 9 in the morning until about 1pm. Sam will kick things off with an entertaining warm up, specifically focused to prepare our bodies for the drills we will cover that day. Typically the first session is more technical before a coffee break (at a lovely cafe on the beach - i found my favourites amongst the rather tacky touristy places) and then the second session focused more on game play and tactics.
At the end of the days training what a joy it was to be able to jump straight in the Atlantic Ocean for a dynamic warm down. The perfect temperature to aid muscle recovery without being unpleasantly cold.
In the afternoon people generally reconvene on the beach at about 4pm to have a few hours open play before sunset. We are often joined by locals and tourists with our coaches back on the scene to arrange the games to match ability level. With 3 courts up, we have a promotion system and you can really fill your boots with as much volleyball as you like. The real privilege is having the opportunity to play with our coaches and learn from the best in action. This is a real pleasure. On day 1 I had the slightly daunting opportunity to pair up with Denise. Seeing how she disguises her shots so well and witnessing her ability to get around the court whilst at the same time giving direction to me, it’s no wonder that she is still winning tours at the top level…..and at the age of 46.
For a taste of this see the video on her homepage of www.beachvolleyballinc.com 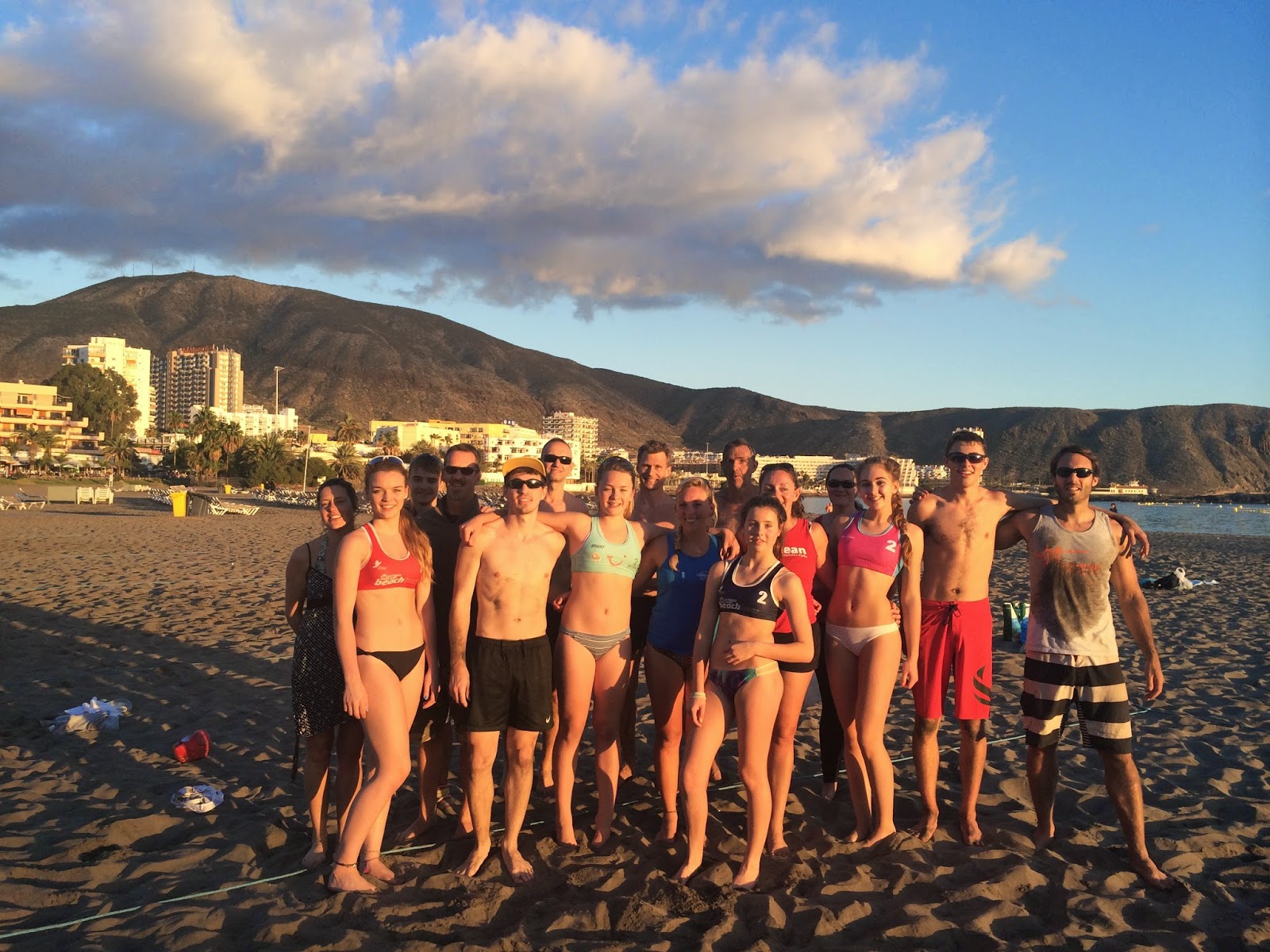